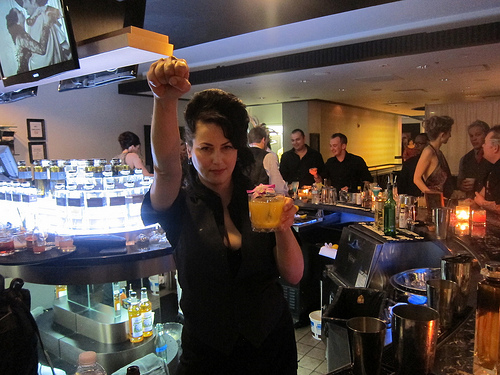 When I heard the pop up Social Mixology was throwing their third year anniversary party with the theme “Blowout,” I immediately checked my calendar. I had so much fun at their Repeal Day party last year and knew this would be even bigger and full of more surprises. It was then a happy coincidence that a couple of LA bartenders were also guest bartending including Naomi Schimek from Spare Room and Alex Strausfrom the Bon Vivants/ Hemingway Lounge. Also guest bartending that night was Nightclub and Bar’s Bartender of the Year, Russell Davis, Josh Harris from the Bon Vivants, Kristen Shaefer from Bond (The Cosmopolitan), Patricia Richards (Wynn), Gaston Martinez (Milagro Tequila), Chris Hopkins (Vesper Bar), Mathias Simonis (Distil) and many more.

Carbonated booze for your pleasure

Held at the Royal Resort, you were greeted with carbonated cocktails immediately upon check-in. 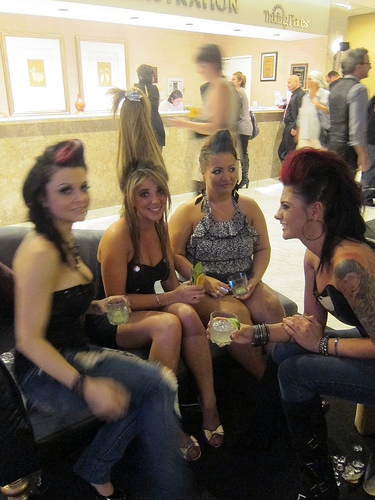 Tobin Ellis, founder of Bar Magic and Social Mixology, had specified everyone had to have a cool hair-do for the event. I saw some really fun and hair-raising styles. One of the girls in the above picture had her hair rolled all the way up! That must have taken not only gobs of gel but I suspect wire. 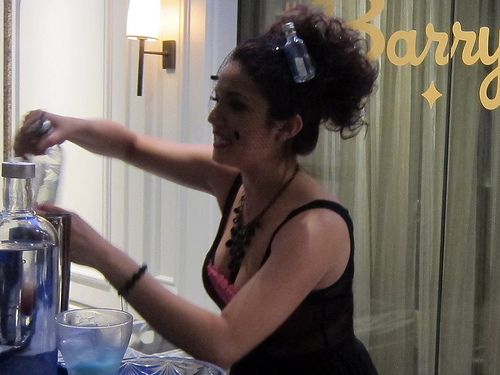 Kristen Shaefer for Absolut Vodka (with bottle in her hair)

As we hopped from station to station, it was obvious how much pleasure everyone derived from the fun hair styles. Danny Ronen wrapped a boa around his head. Many of the guys sported colorful hair while many ladies went for pompadours.

Josh with his amazing tropical drinks

Normally leery of brightly colored cocktails, I happily sipped and finished Josh’s tropical drink. I also enjoyed his buddy Alex’s gin cocktail. It was a nice one for the serious booze nerds in the house.

Those tropical umbrellas love to wander. 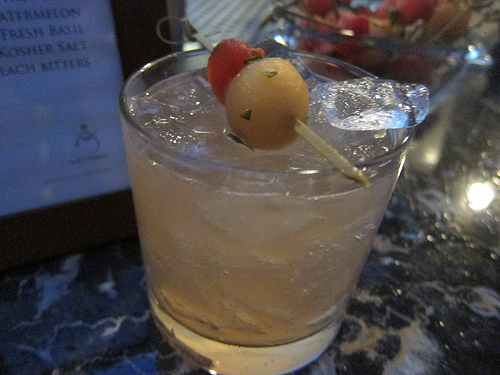 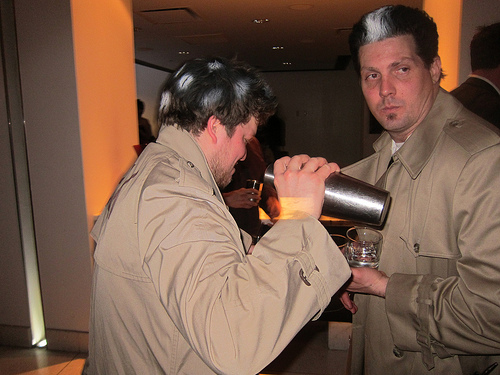 Mathias Simonis partnered with Dustin Drankiewicz to provide some stealth mixology. The two walked around wearing trench coats with “cock” and “tails” written on the back of their coats. If you asked for a drink, you were served a damn good one.

Everyone was raving about Gaston’s mad scientist hair and station. I was aiming for Russell Davis’ Amaretto cocktail but he ran out of mixers and in the meantime, Gaston wrapped up his Sailor Jerry station. Most continued to party at the tequila bar or danced the night away. There was also a food truck but many opted to go to one of my favorite Vegas joints, the Peppermill.

Social Mixology is on the move. I hear they’re heading to New York soon. I hope that means I get to catch them at Manhattan Cocktail Classic!

Links! Get on it!