I recently learned quite a bit about Canadian whisky and in particular about Wiser’s Rye. We also got to taste Wiser’s 18, Lot 40 and Pike Creek whiskies with Master Blender Don Livermore.

One of the things I found particularly fascinating was the use of the word “blended.” Some single malt fans sneer at such a word but the Canadians use it differently. They do not mean it’s been blended with neutral grain spirits at all.

For example, the mashbill for American bourbon is at least 51% corn and the rest is made up with rye or wheat or other grains. All the grains are distilled together, aged then bottled. For J.P. Wiser, the grains are distilled separately and then blended together after aging. This is actually easier to figure out what the final whisky will taste like because you can blend a small amount and figure out if perhaps the corn distillate (or whatever) needs to be aged longer for your final bottling. All this work goes by the name blended whisky. Maybe you need to age that corn or barley more before wasting huge amounts. For Americans and other distillers around the world, they taste the distillate (juice) constantly to see if it’s ready for market. When I asked about the space to age all these distillates separately, Don said it was negligible.

As for the Wiser’s 18,  this limited edition might be the first whisky for the distillery with an age statement. Comparing the rye to the 18, I liked both but there is a distinct roughness to the rye. The 18 was great neat or as an old fashioned. 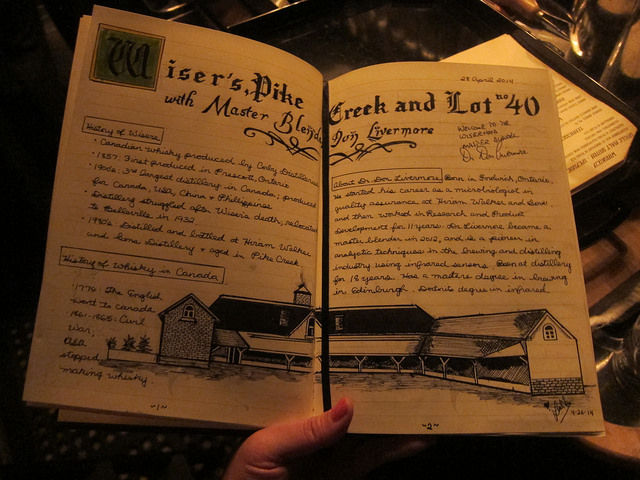 At the tasting, I spotted a talented and artistic bartender taking notes in her journal. She had drawn pictures of the distillery and the bottles then added the notes during the tasting. In this digital age, it was amazing. I compared her journal to illuminated manuscripts of old. 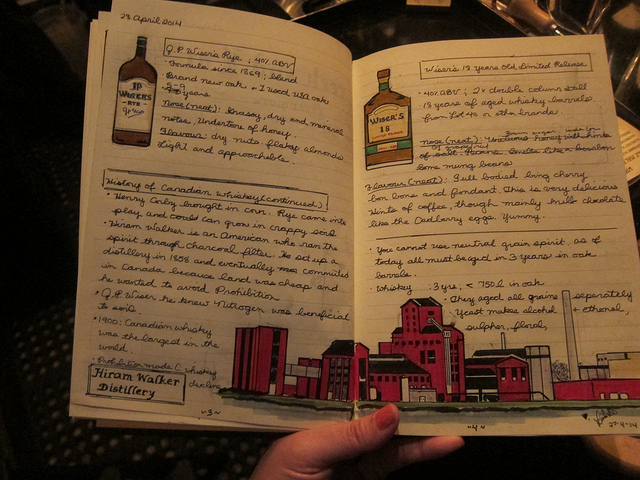 We also tasted Lot 40 which is distilled entirely of rye. If you like spicy whisky, this is the one for you.

I preferred the Pike Creek which had been finished in port barrels. It had a pleasing dried fruit profile that I think would be great in the popular whiskey-sherry cocktails that have been popping up on menus. With Pike Creek, it’s almost a 2-in-1 product! Pike Creek cobblers anyone?

In Downtown Los Angeles, you can find Wiser’s and the other Canadian whiskies at the  Ace Hotel. I have also spotted Lot 40 at the new Tunnel Bar in Sherman Oaks.