Has it only been a year since 1886 has been open? A few weeks ago, the bar inside the Raymond celebrated their 1-year anniversary with a huge celebration. Closing down the restaurant, there were food and drink stations set up in and around the restaurant and bar. I got there a bit late but still managed to snag a drink a few bites.

The bar had been transformed. The rack above the bar with its usual whiskeys had been cleared to showcase the liquors for the cocktails being made in that room.

We found our way inside and it was packed. I made it to the bar and got the Hudson’s Honey Nut Old Fashioned for myself and the Hendrick’s Orange Grove for a friend. They were also serving a Milagro Medicina Latina, Glenfidditch’s Therapist and Pimms #2. Happy 1886 cocktail consultants Aidan Demarest and Marcos Tello were on hand to celebrate.

Around the side, they were serving Buffalo Trace neat along with grilled skewers. I tried the beef, chicken and octopus. Surprisingly the chicken was my favorite followed closely by the octopus. The kitchen did a great job turning out food for everyone.

On the other side, there was an enormous tent erected to accommodate seated guests and a band. There were also dessert and drinks stations.  I made my way over to check out the whiskey smash which party revelers were talking about but ended up getting a zombie.

I managed to snag one of the last few Sailor Jerry Zombies Brady was happily swizzling away at. The Hudson Baby Bourbon Peach Smashes were also on the menu. 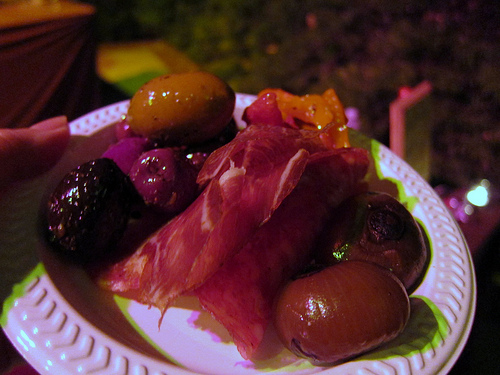 I missed all the scallops but there were plenty of charcuterie out front. I also had a chance to try one of the two punches.

I’ll have to try the 1886 Punch next time but the Hendrick’s Gin Rose Parade Punch was lovely. I wonder if they’ll offer this again around New Year’s for the Rose Parade festivities?

What a great party and I hope they do another fabulous event like this soon.