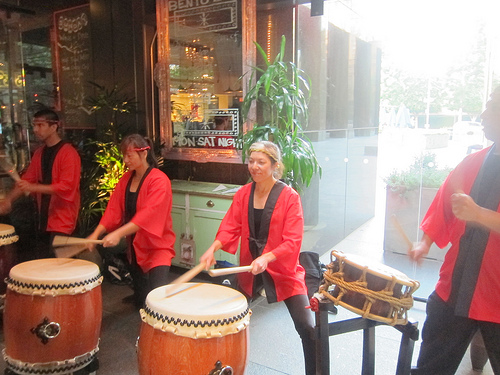 Last Friday, Chaya Downtown welcomed 9 regional sake producers who poured 25 different sakes. At $35, this was very reasonable since it included food. I really hope Chaya brings this back as it was very successful and I got to taste many interesting things besides sakes including a spicy plum wine and a not-too-sweet sparkling sake. I also enjoyed a yuzu flavored sake and had quite a few outstanding traditional sakes. Here are some pictures from the event. For all the photos, check out my flickr set.

Also check out my videos of the taiko drummers who brought a lot of energy to the event. 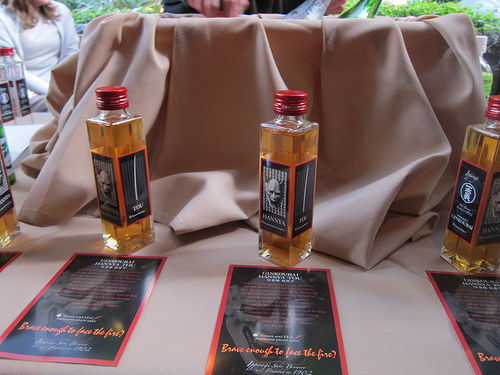 This Hannya Ginkoubai Plum Wine with chili pepper probably stole the show for a lot of people. Their tag line- “brave enough to feel the fire” is appropriate.

While at my last table to taste sake, I met Brian Boothe who indicated the above sake was his favorite of the event. He is a certified sake professional. We talked about how there are sake shops in San Francisco, Seattle and New York but none in LA. Perhaps with enthusiasts like Brian, there will be soon.

In the meantime, Chaya Downtown is switching things up to beer. Their annual Japanese Beer Garden returns June 5 through August 31st. I look forward to the yakitori skewers, particularly the beef tongue and mushroom. A new item, the Mozuku somen sounds intriguing.