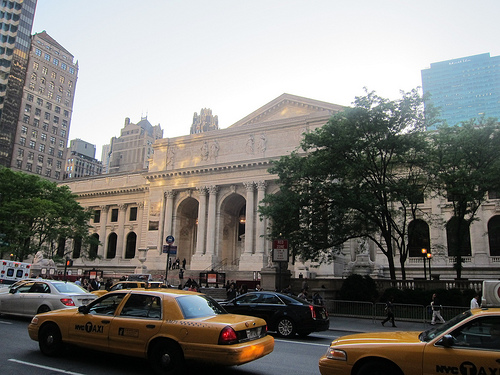 Last month’s Manhattan Cocktail Classic kicked off the five days of seminars, tastings, spirited meals and competitions with the opening night Gala. After checking out Mandarine Napoleon earlier in the night, I popped across the street to join the fun.

MCC took over the four floors of the New York Public Library, decking out the normally quiet halls with brilliant sashs, food and of course, drinks. I was very excited to receive a bracelet from Tasting Table that promised to keep track of the drinks I was imbibing. First you had to register the bracelet on your smart phone via a Facebook login (you have a smartphone, right?) and then tap the bracelet at the boxes at each station. As I didn’t receive an email detailing my drinks and the promised recipes, it’s a good thing I did snap a few photos.

My first drink at the Gala was Buffalo Trace‘s Buffalo Smash (Buffalo Trace, peach nectar, ginger ale). It was a light drink to begin my night of serious tasting. I skipped up the stairs to the various floors, tasting and eating my way to the top and then back down to the basement.

I found myself in the vodka room. I stopped to say hello to a few people including Danny Ronen but I was in search of something new to me. Next I found a room full of rum but even then I kept going thinking I would come back to try the Caliche drink Ezra Pattek was serving up. 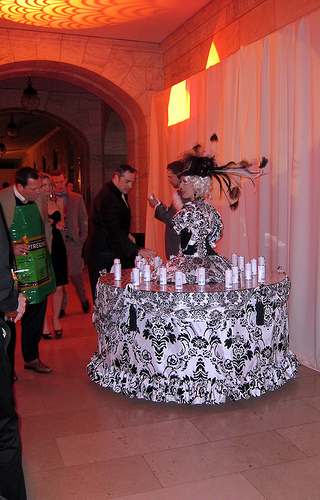 On the second floor, I met the Mercy lady. I found it hilarious how the man with the Chartreuse apron was giving Miss Mercy quite the stare. You think he was checking out her cans? 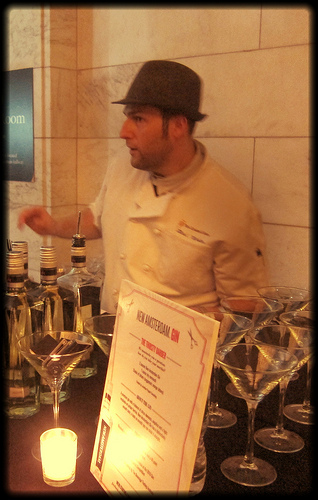 I was about to turn away from the corner where the men’s room was located but noticed barbers actually giving gents haircuts. Then I saw the New Amsterdam Spirits. Of course I had to try a cocktail from Hal Wolin whom I met at Portland Cocktail Week last year.

I had the Thirsty Barber which is New Amsterdam Gin, dry vermouth and my choice of bitters. I opted for the Bittermens Grapefruit and Hops bitters since I’ve never had those before and they sounded interested. Hal had recommended the standards like Angostura, Peychaud’s or Regan’s orange bitters but I wanted something different. I met some gentlemen from New Jersey while waiting for my drink and they were just so excited to be there. They had rented a car and came with their wives not knowing what to expect. One asked how does one become a cocktail writer- does one drink a lot in college. Sure…that’s one way to go. Well, moving on…

I tried quite a few more cocktails including a classic Negroni from Campari while running into pals from around the country. It was so much fun to see everyone, many I haven’t seen for months — not since Portland Cocktail Week, Arizona Cocktail Week or Nightclub and Bar. I’m looking forward to seeing everyone at the next big shindig, Tales of the Cocktail!

After the Gala, we went to the Tanqueray Ginstitute after party at Fatty ‘Cue. There I tried three cocktails including a martini, the Green Snapper and the Calcutta Collins. The Green Snapper was my favorite. 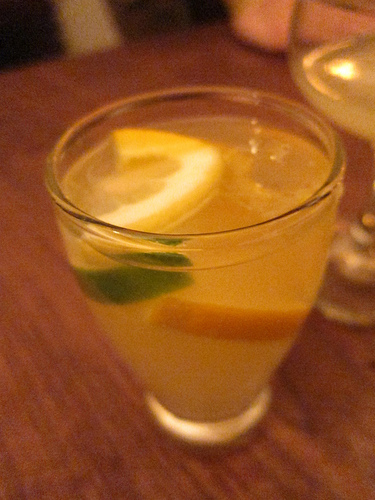 We had a great time at Fatty ‘Cue. Lots of good appetizers to get the thirst back up.

Next we hopped over to Daddy-O for the Zacapa Rum after party.

Like Fatty ‘Cue, it was a tight squeeze inside Daddy-O but we made it just in time to snag some food as well. They had some amazing meatball sandwiches. That was the one thing that tied all the events together- great food at every event to go with the fantastic drinks.

My last drink of the night was from Zacapa. What a wonderful way to welcome MCC!

3 thoughts on “Manhattan Cocktail Classic 2012 Gala and After Parties”