I was at a friend’s and was giving my opinion on some drinks she was developing (i.e. doing what I always do- cocktail navigate!). The above photo represents the combined booze of her and two friends. We would also cook dinner and wreck the kitchen with bottles and chaotic elements from our meal.

While she was cooking and making drinks, I was examining some bottles I hadn’t seen or tasted before.

The D’aristi Xtabentum is a Mayan liqueur of honey, anisette and rum. I tasted it and found it a bit too sweet for me. It would definitely be better mixed. It’s clear, a bit heavy and needed some citrus to cut it. Later I read some mix it with tequila and lime. I found a good blog post on experimenting with this liqueur. 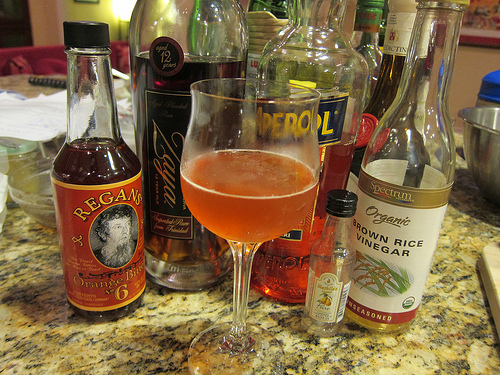 As mentioned, there were kitchen and cooking stuff strewn in with the booze so while I was being OCD, I picked up the bottle of brown rice vinegar and joked I should make a cocktail with it. By then the R&D was over and I was busily making my favorite drinks involving Benedictine and Green Chartreuse. I had not really thought to come up with an original until I saw the vinegar.

First I started off with Zaya rum which is one of my favorites. Usually I reach for Campari but I didn’t want too much bitterness with the rum so I selected Aperol instead. A remaining ounce of Mathilde Pear Liqueur along with dashes of Regan’s Orange bitters and about half an ounce of the aforementioned brown rice viengar. The result? It was good but needed more tartness. I ended up adding some lemon juice to bright up the flavors.

Summer into Fall by The Minty

Combine all into a shaker, shake until condensation forms on shaker. In my case, I could actually feel a whisper of cold breeze by my ear when it got really cold. Strain and serve.