At this year’s Portland Cocktail Week, I had a chance to try Ancho Reyes, an ancho chile pepper liqueur that’s launching in California and Texas this month.

The liqueur is made from a Mexican recipe dating back to 1927. The flavor is very much of chile, chocolate and cinnamon. It can be enjoyed neat but I got to try it in several cocktails showing its versatility.

We were at a maize maze in Portland and I had some notion we would have to get to the center before trying this elixir. It turns out we found the punch pretty much as soon as we entered. Alex Straus from the Bon Vivants and LA’s Hemingway’s Lounge was manning the table. The day was fairly warm (it doesn’t always rain in Portland) and so the punch was very much appreciated.

As we walked along, we also encountered Ancho Reyes daiquiris. This was my favorite cocktail with Ancho Reyes. 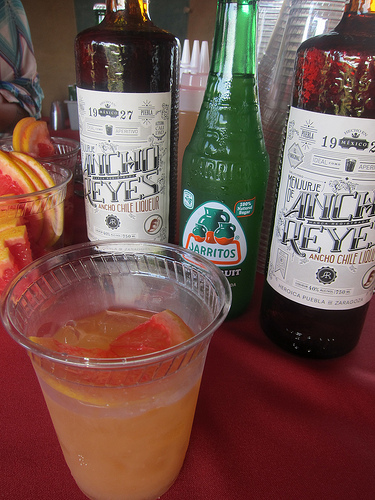 I’m glad we were able to try Ancho Reyes so many different ways. I don’t know if I would have paired it with a citrus base or in punch because of the cinnamon spice but it worked really well.

It’s not a Bon Vivants party without food. Scott from the Bon Vivants made a really great birria (goat stew). It was a lovely day in the maize maze with attached pumpkin patch. I hope to see it showing up on LA cocktail menus soon. A little birdie told me they just might be at the Golden State of Cocktails in January.