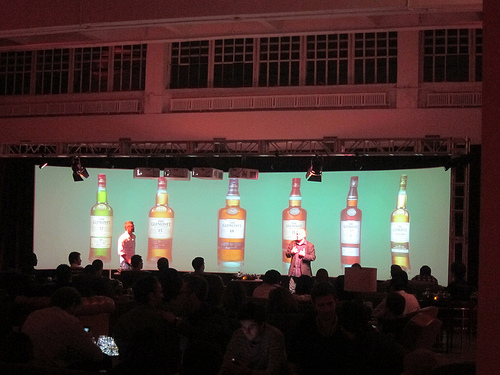 A few months ago I signed up to be a Glenlivet Guardian. Within a few weeks, I was invited to a tasting they were doing in Downtown Los Angeles at the Cooper Building. They were running a couple of tastings a night for a week or so. I opted to go to the last one. I arrived with my Scotch-loving BFF and first enjoyed the 12-Year on the rocks.

Glenlivet is a Scotch from the Highlands so none of that “peaty” taste that some people associate with Scotch. Those whiskys are from Islay. It’s interesting to me how so many people are not into Scotch because they think it’s all smokey and peaty. They should try a whisky like Glenlivet and they’ll come around. Then let’s work around to the others great Scotches.

Since this tasting was more of a general tasting, there were a couple of Glenlivet reps talking about the various bottlings they had. They had tins of different scents representing the three whiskys we were going to taste- the 12, 15 and 18 Years. First we smelled something the tin, then tasted. I thought the first one smelled curry. But it was supposed to be fruity. The second smelled like curry again to me (what did I have for dinner??!!) but eventually, it resolved itself to cardamon or chai tea. This was the “spicy” one. And the next was definitely floral. I unscrewed the tin and saw it was pieces of my one of my favorite flowers, the stargazer lily.

We kept sniffing,  added water when told and we tasted. Initially, I liked the 12 and 18 Years. They were very smooth. The 15 was quite a bit spicier and perhaps harsher. However, once we added a couple of drops of water, it rounded out and my friend declared it was actually her favorite. A different whisky for a different mood. What year is your favorite?

I was talking to some people after the tasting and they were very pleased with it. One had never gone to any sort of liquor tasting. I’m afraid this Glenlivet tasting spoiled us as they gifted us with some very nice glasses. I highly recommend joining the Guardians to find out when a tasting is coming near you.

3 thoughts on “Scotch: Nights of Passage – The Glenlivet Tasting”