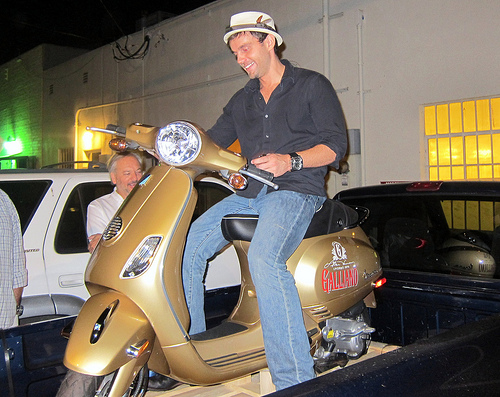 Jeremy Lake, the bar manager for both Chef John Sedlar’s restaurants, Playa and Rivera, recently won the Galliano Golden Vespa Los Angeles regional competition with his cocktail, the Italian Motorcade. One of his prizes is the Galliano Vespa, a golden one of course.

The finalists were selected from recipes they had submitted online. The LA regional saw bartenders come as far as Sacramento and also from San Diego. Judges including cocktail blogger Thirsty in LA selected Jeremy as the regional winner. There are also four other regional winners including New York, Boston, Chicago and San Francisco.

The competition required the use of Galliano L’Autentico which previously was best known as an ingredient in a Harvey Wallbanger (Galliano, vodka, orange juice).

Jeremy’s Italian Motorcade features Galliano, Creme de Cacao, Yellow Chartreuse, coffee liqueur and cream. First he rinses the cocktail glass with absinthe and then adds the stirred cocktail. To finish, he tops the drink with thick cream poured carefully over a bar spoon. Initially the drink would seem like a dessert drink with the rich cream and chocolate/coffee flavors but the kick of absinthe and chartreuse really comes through. And delightedly, the Galliano comes through and lingers at the finish. It really was a special drink. 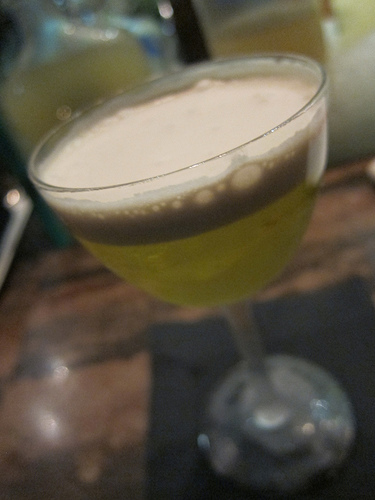 And it’s gorgeous. The creamy layer atop the glowing green cocktail was very well received by the bar patrons.

While I was there, I heard Jeremy had come up with another Galliano cocktail he named Suffering in Silence. Of course I had to try it. Besides the Galliano, there was also anejo tequila, high-proof bourbon (he used St. George’s Breaking and Entering bourbon), lemon and shook with dry ice. After double-straining, the cocktail is garnished with crystallized mint Jeremy made, pickle chips and rimmed with a cocoa and sea salt mixture. When asked why he chose to garnish with chocolate and pickles (was he pregnant?), Jeremy replied the the cocoa inspiration comes from the chocolate notes in the anejo tequila and bourbon. And the pickles from the dill flavor from American white oak barrels the whiskey had been aged in.

This cocktail isn’t on the menu at Playa yet but maybe if you ask him nicely, Jeremy will make one for you.