I’m not sure when summer left because it barely seemed like it was autumn around here. And now it’s officially winter. With that in mind, Drago Centro launched their new Winter cocktails with just a few days left in year. I’ll be sipping on these into 2013.

Pictured above is Jaymee Mandeville with her Drago Centro bartenders team. On the left of Jaymee is Nathan Burdette who was guest bartending that evening. He is from Ohio. He also made most of our cocktails for our tasting.

Jaymee explained curacao  has been around for a while but it’s great to find a less sweet one. Pierre Ferrand makes a dry curacao she enjoyed using in the Black Leaf cocktail. I’ve been seeing a lot of grapes in fall cocktails and I’m sure that’s when Jaymee made her concord grape shrub. She’s been making shrubs long before it was trendy to have them in cocktails.

Naked in the Woods

One of my favorites on the menu is Naked in the Woods featuring my fave St. George Terroir gin (shhh, I like Dry Rye and Bontanivore gins as well).  I didn’t get that much of the kiwi and mint in the infused Dolin blanc vermouth but that sneaky St. George absinthe did throw me off a bit. Good thing the lemon bitters keeps it balanced. 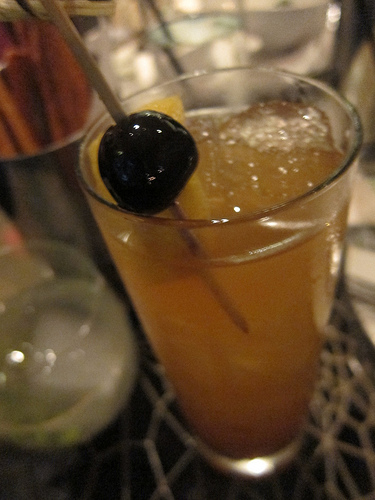 Got Scotch? Jaymee makes this one easy sipper with an unexpected citrus soda, yuzu. I think this is a great drink that transitions us from warm summery Cali nights to our “freezing” winter ones. 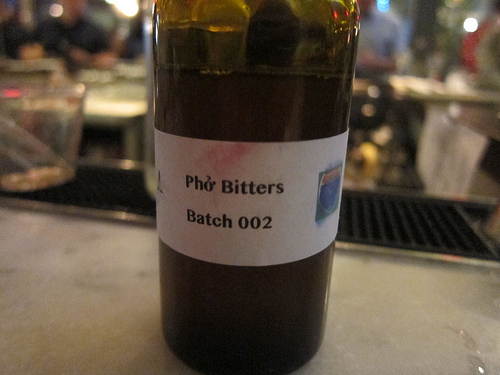 I was pleased to try the Miracle Mile pho bitters on their own. Imagine getting down to the very bottom of a stockpot and sipping on the last few dregs. Now imagine that as bitters. These are perfect in a savory cocktail like Jaymee has done with the Growing Roots. Her beet cocktail, Morning Courage, from last Winter’s list is still one of my favorite beet cocktails. And I’m glad to see her new beet cocktail, Growing Roots, make an appearance. This one is lighter because of the ginger beer but still wonderful.

Mezcal, Meletti and egg white? What a great combo. Coquettish Angel was one of my faves.

I first tasted the aged Novo Fogo a few months back and I thought it was great on its own. In this cocktail, Jaymee adds her cinnamon-espresso tincture which gives it some spicyness along with the Creole bitters. Overall it was a bit sweet for me but as it mellowed out, I was able to sip on it. I thought about having it on the rocks next time.

Kissing Cousin’s is Jaymee’s version of the classic Bijou cocktail (gin, sweet vermouth and Green Chartreuse). For hers, she switches out the green for yellow Chartreuse and adds bitters. She also made her own vermouth. I recently talked about making your own vermouth and in particular gave a recipe for rose vermouth.

I quite liked her variation and can see why she went with the softer yellow to give the vermouth a place to shine. 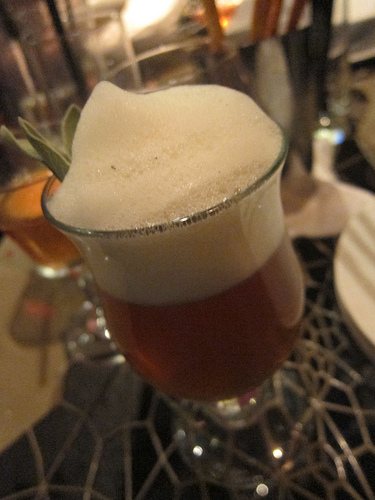 For an Italian restaurant, brown butter and sage seems perfectly natural. And I’m sure that must have been the starting point when Jaymee came up with this divine hot drink. It’s like a hot buttered rum but instead of rum, you have Casa Noble reposado. This was my favorite cocktail of the new cocktails. I’ll be sipping on this tomorrow. And probably up until Spring.

2 thoughts on “New Winter Cocktails at Drago Centro for 2013”