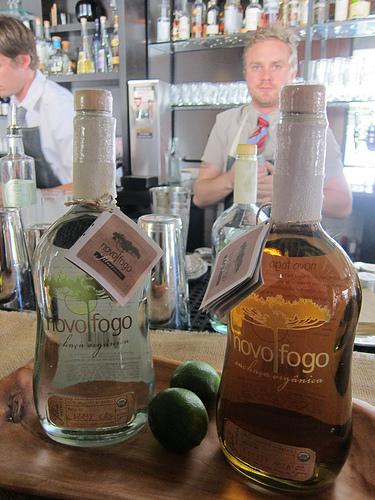 Recently I was invited to a cachaca tasting sponsored by Novo Fogo at the Parish. Cachaca is classified as rum by the American government but that is hopefully changing soon. Cachaca is a Brazilian spirit made from sugarcane juice. Whereas rum is generally made from molasses, a sugarcane by-product.

Novo Fogo has two expressions that are more widely available, their silver and their barrel-aged cachaca. Then they have a rare cachaca they’ve barrel-aged for 5 years called Barrel 105. I have never tasted this one.

Her Name is Rio

We were greeted with cocktails from John Coltharp and Brian Summers. Her Name is Rio (Novo Fogo silver, lime, R&W Orchard Pear, simple syrup, Angostura bitters, El Segundo White IPA) was a deliciously refreshing drink on the (then) hot day. 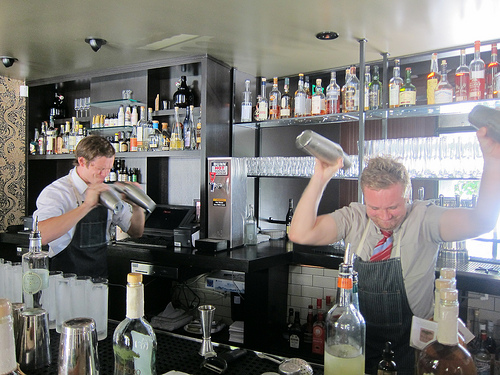 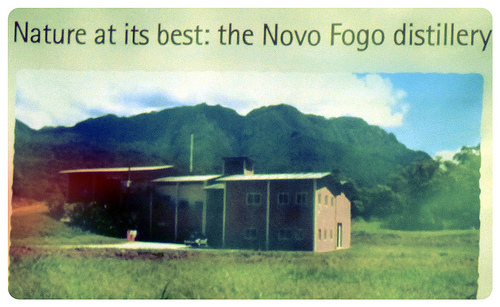 We had a lot of fun learning about cachaca but more importantly Brazilian Portuguese slang just in case we find ourselves imbibing in South America. Generally though, if you find yourself in Brazil, make fun of the Argentinians and you’ll make Brazilian friends for life.

Caipirinha – a popular cocktail made with cacacha (it means little hick)

Fique tranquilo – translates roughly to “got problems? Worry about them later, tomorrow is always better.”

Porra – there’s no R sound in Brazil so this is said, ‘poh-hah’ which is a curse word 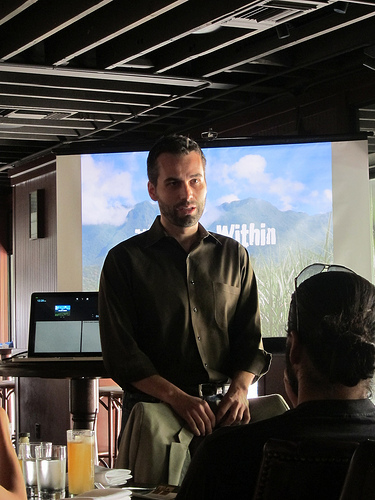 Dragos Axinte for Novo Fogo then led us through a tasting of Novo Fogo along with three other cachacas he picked up in Brazil. 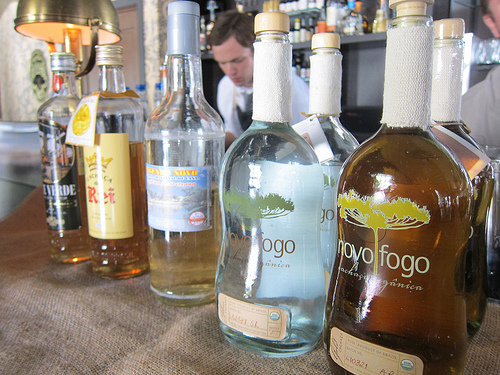 From what he said, it sounded like many people made their own cachaca any way they can so don’t count on those to be organic or free of chemicals unlike Novo Fogo which is USDA certified to be organic. Novo Fogo is also a very “green” company, using the heads and tails from the distilling process to fuel cars and as cleaning products. Also, the bottle is handmade from recycled glass. If you take a look at the bottles, you’ll see some numbers that give the bottling year and the day of the year. This label for the small-batch spirit is also hand signed.

We then connected to the distillery via Skype to learn more about the distillation process from Dr. Cachaca, Dr. Agenor Maccari, Jr. who is the master distiller at Novo Fogo. We saw him mix the yeast to start the fermentation process. The Silver is rested in stainless steal tanks for a year while the barrel-aged is in those repurposed oak barrels for two.

We finished up our cachaca education with the Rabo de Balo cocktail. With the barrel-aged cachaca, Cynar, Carpano Antica, Novo Fogo coffee bitters, who needs dessert?  Although the Parish was kind to send out gulab jamum (Indian fried dough dessert) and the cardamom flavors went very well with this cocktail.