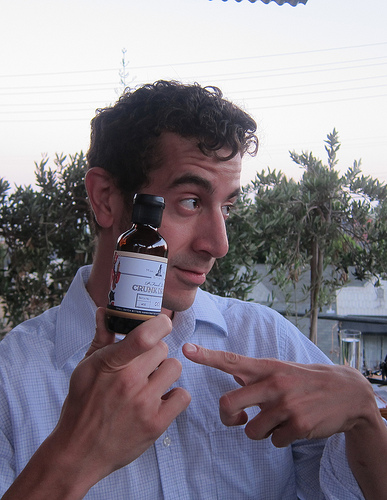 Los Angeles is blessed with the Miracle Mile Bitters company. Owner Louis Anderman is hip to the cocktailians and the craft bartenders culture. Originally in the other “biz” in LA (film), he started making bitters which soon took over his life. He named his bitters company after the mid-city stretch in LA known as the Miracle Mile.

His bitters are extremely interesting which include flavors like yuzu, sour cherry, bergamot, candy cap (mushroom) and more. He didn’t want to make another “Angostura” but that’s what I’d use the Miracle Mile Forbidden bitters for. Pretty soon the requests started coming in from the LA bartenders and that’s what I found to be the most fascinating thing about Louis’ business. I’ve seen him make Charoset bitters, LA Loves Boston (a special batch for a fundraiser to help victims of the Boston Marathon bombing) and he’s been teasing about Ume bitters for months.

Recently I heard Patina Restaurant Group bartender Paul Sanguinetti who goes by the nickname, P. Funk, say he wanted bitters from Louis. A few weeks later, I saw Louis hand him the very first bottle of Crunk Drops with special ingredients, “no scruples.” 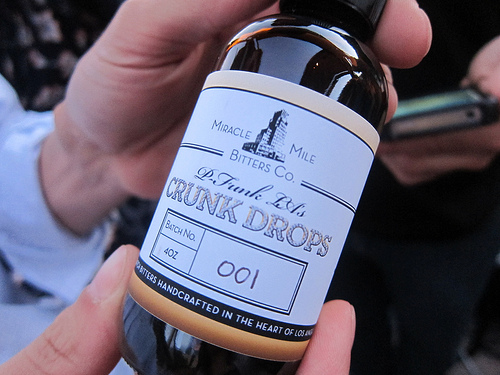 I can’t wait to see what Paul comes up with. I got to taste them and they are indeed “funkalicious.”

Will any of these bitters be making it into the drinks at the Hollywood Bowl where Paul is behind the new wine and cocktail bar? Or perhaps cocktails at Kendall’s Brasserie where Paul just revamped the list? Or maybe they’ll show up at his old stomping grounds, Ray & Stark’s bar. 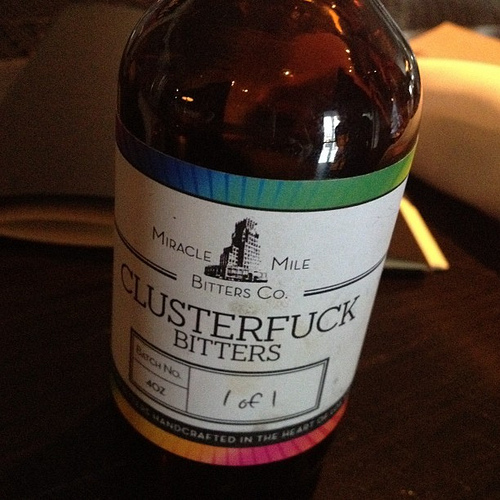 We all make mistakes but sometimes the results turn out to be better than expected. What happens when you cross orange bitters with toasted pecan bitters? You get Clusterfuck bitters with the ingredients that include “stupidity.” Miracle Mile put out this obviously limited edition batch for sale at Bar Keeper and it sold out in a nano second. If you want to win a bottle, they’re auctioning the very last bottle at Art Beyond the Glass this Sunday along with other never been sold bitters including the PFunkLA Crunk Drops, Hello Cari, Barrel-aged Forbidden bitters, Damn You Matt Wallace, Lush Angeles Pho bitters and more (ooh, I hope they include the Fuck You Chris Day bitters). 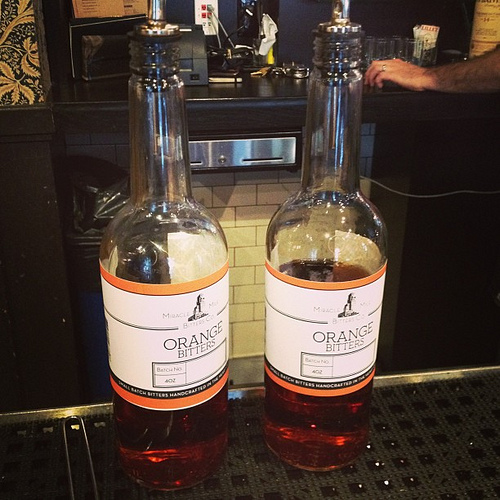 Also, rumor has it Louis is considering making amaro. Would this be LA’s first amaro then? Considering my love of shots of Fernet-Branca with a few dashes of Angostura bitters, this could be the next big shot in LA; Miracle Mile amaro + Miracle Mile bitters. Perfect.