Recently Culina at the Four Seasons Los Angeles at Beverly Hills had their first craft beer dinner with Firestone Walker. It was probably the fanciest beer dinner I’ve ever been to. I already adore the restaurants and bar at the Four Seasons and being the private room at Culina was very special. We sat around one enormous table and got to know everyone dining. It was notable there were more women than men at this dinner and I liked that craft beer is on the rise with the ladies. Firestone Walker’s Barrelmeister and Barrelworks Director Jeffers Richardson also attended the dinner.

Chef Mette Williams outdid herself pairing the beers with the food at Culina. We started with one of Culina’s attractions, the crudo. The Capessante or scallop crudo was served with the Firestone Pivo Pils, a classic German Pilsner.

Lagers are always a great way to start since they are refreshing and the lightness highlighted the scallop and brought out the flavors of the chili, ginger oil, Tuscan melon and celery leaves. 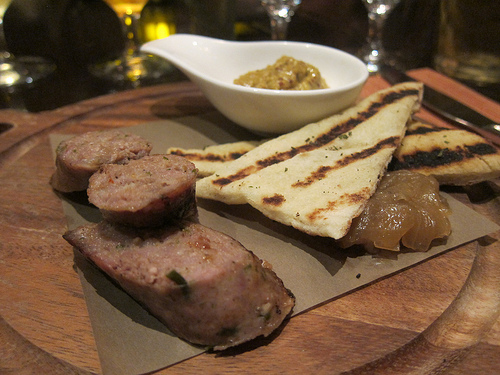 For the second course , we had the Salsiccia Casereccia, a house-made pork and veal sausage. Chef Mette whipped up a mustard that included the beer, Firestone Pale 31. It is always nice to reinforce the flavors of the beer in the food.. The beer is a California pale ale and is named Firestone Pale 31 because California was the 31st state to be added to the union.

Moving on to our main course, we got the Firestone DBA (double barrel ale) with the Costolette Di Manzo or braised short ribs. We were getting into the dark beers I love so much. Whiskey girls love their dark beers.

There was a lot of joy around the table as we devoured our huge portion of shortribs. I really couldn’t believe how massive this cut was. And it was unbelievably tender. Chef Mette braised the meat for hours. We could have eaten this dish with just a spoon. The cheddar grits had a little bit of the DBA beer. I also enjoyed the not so common beet greens. Usually I would expect Swiss chard or even the ever popular kale. I appreciated these greens since they were a little bit sweet and balanced the hearty dish.

As a surprise, we tried a barley wine, the Firestone Sucaba. So named because a winery that produces Abacus wine sent them a ceast and desist letter. Personally I wouldn’t confuse wine with beer but who knows what others think. If you look closely, the S of Sucaba is a legal symbol that is a subtle reminder of the dispute.

I really enjoyed Sucaba, a much better name than Abacus. In terms of proof, it’s very strong so just a little bit is great with dessert.

We also tried Firestone Wookey Jack, an unfiltered black rye IPA. This was the first time I had a black IPA. For dessert we had chocolate pie that was paired with the oatmeal and raisin ice cream. The ice cream was made with Firestone Wookey Jack. Again, loved reinforcing the beer flavors through the food.

It was a fabulous meal and it’s been a lot of fun watching the events come out of the Four Seasons. From caviar to beer, where else will they go?