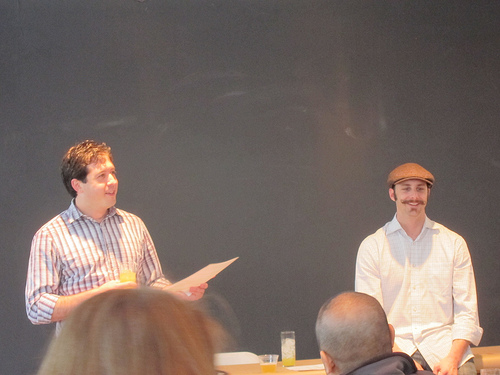 Beer cocktails have become somewhat trendy in the last couple of years. I have to admit, I am a spirits snob. I tend to favor cocktails and although I drink beer and wine, they are not my favorites. However, I am a bit OCD and once I am interested in something, I will learn as much as I could about it. So I know what beer I like. I also know what sort of wine I like. This only comes from tastings. And drinking. Yes, a lot of drinking.

I am fascinated by all things cocktail and wanted to attend the beer cocktails seminar.  Beer Cocktails with Jacob Grier and Ryan Conklin was definitely an eye-opener at Portland Cocktail Week. I like Jacob whom I met by coincidence a few months back at the Thrillist/ Bols Genever punch crawl in Downtown LA. Besides being the lead bartender at Metrovino in Portland, Jacob is an ambassador for Lucas Bols (which owns Bols Genever) and is also into coffee and beer.

Ryan is a certified cicerone (beer expert or sommelier) from Euclid Hall in Denver, Colorado. These two were perfect to lead the class. I say eye-opener because I really did learn beer cocktails are more than shandys (beer and lemonade), micheladas (like a bloody mary but with beer), snakebites (beer and cider) or the most classic- a beer and a shot (Boilermaker).

Jacob discussed the original flip cocktails which were warm ale drinks. You would beat up eggs with sugar and then slowly flip it into hot beer and rum, turning it slowly from one container to another. If not careful, this could lead to scrambled eggs. It works much better with cold drinks.

First we tried the Harvey Weisbanger, a take on a Harvey Wallbanger. Made with Galliano, OJ and a wheat beer, this was a light way to start our class. It was followed by Ryan’s Euclidian 75 which had gin, lemon and beer. It was delicious and my favorite.

We also tried a Capri-beer-ihina which you guessed it, is a caprihina with beer. This had a Novo Fogo float.

Jacob and Ryan talked about experimenting with beer cocktails by either enhancing their natural flavor or using it in place of things like sugar. For instance, for a beer bramble, you’d take out the sugar. Just look for similar flavor profiles. Ryan’s Breakfast at Midnight beer cocktail he serves at Euclid Hall uses stout, bourbon, coffee and maple syrup. The flavors of stout are complimentary to bourbon (probably why when I do drink beer, I like darker beers like stouts and porters as a bourbon drinker). 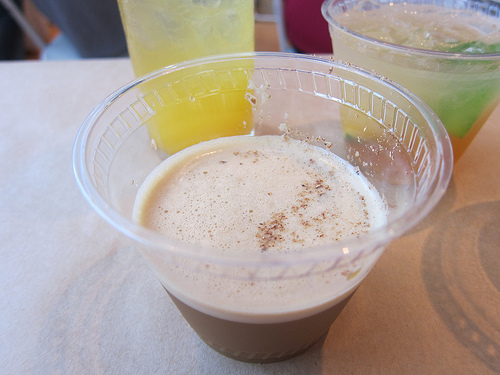 I found it interesting that Jacob and Ryan are doing much more with beer cocktails than just using it to replace spirits. They’re using it in conjunction with spirits. Jacob’s Averna beer flip is an example of this.

Ryan mentioned experimenting with beer syrups. If there is leftover beer, he might cook it down for a syrup to be used in a cocktail or give it to the kitchen. They could use it in pastries and other dishes.

After the class, we were all very enthusiastic about beer cocktails. I have been talking about it with my friends for weeks. Here are some ideas to experiment with:

A Toronto spirits writer has been experimenting with an absinthe rinse, Duvel and a shot of gin. Perhaps add Chartreuse?

Could do a Scotch rinse and IPA.

Margarita with Mexican beer- this one reminded me of how I used to make “beer-garitas” which was essentially a pool party drink (take a pitcher, add 1 can of frozen lemonade mix, tequila and top with Mexican beer)

Try not shake beer too much in cocktails, you’ll get too much fizz/ foam.

I learned that in Colorado, it’s actually illegal to sell beer lower than 3.5%ABV.