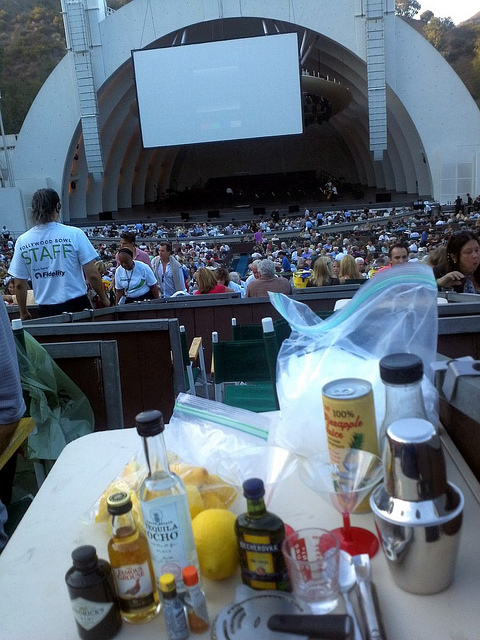 at the Hollywood Bowl

When I first started going to the Hollywood Bowl, I’d show up basically with a sandwich and iced tea. I remember sitting there gnawing away at a lame sub seeing a man in his box who had brought a tablecloth, flowers, a bust of Mozart, candles and big bottle of Johnny Walker Blue. Years passed and we started bringing bottles of wine and the occasional bottle of soju. 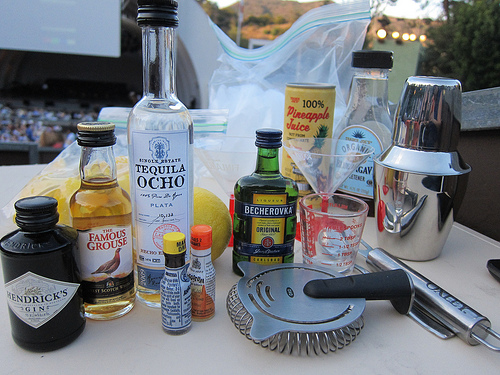 And this year? Why, I decided I was going to go all out. To bring a makeshift bar to the Bowl requires some planning. First of all, I didn’t want to lug that much. I collected a few miniature bottles of good spirits and bitters, cut up lemon wedges to squeeze for juice (of the lime versus lemon question, I tend to go for lemon juice) and then I assembled everything else- from my mini shaker, Hawthorne strainer, zester, whole lemon for the peel, mini cocktail glasses and a spoon. I don’t have a mini bar spoon (is there even such a thing?) so a regular one will have to do. I also brought a shot glass, pineapple juice, ice and agave syrup. I decided I wasn’t going to muddle or make stirred drinks.

cocktails by The Minty

It was pretty funny when people around realized I was mixing drinks. One called over that this was the best pre-concert show. And another said my drinks were too cute to even drink. But when the concert started, I put everything away and drank things neat.