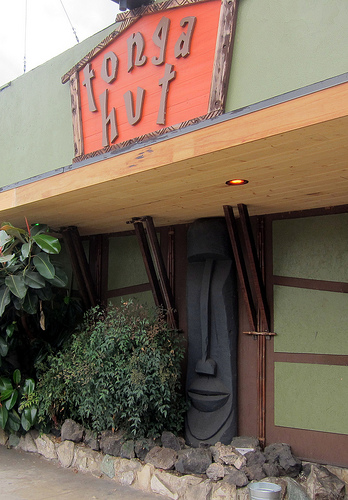 Recently I hit up Tonga Hut for their 55th Anniversary party. I’ve always liked tiki culture Some might even say one of my favorite drinks is a Mai Tai since that’s what I usually order whenever I’m anywhere near a tiki bar– and possibly because the only time I ever fought over a cocktail recipe was about a Mai Tai (I always go for orgeat, never amaretto). I was bummed when Bahooka closed its doors earlier this year and have hit up a few tiki nights around town. I probably spend the most time though at what I call neo-tiki bars like Cana Rum Bar. Another good one in LA for tropical (if not exactly tiki) drinks would be La Descarga. 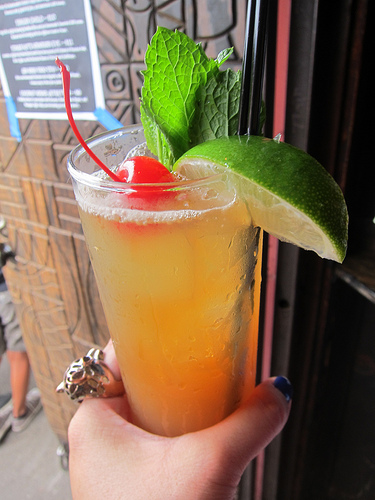 I had never been to Tonga Hut before and will have to return when it’s not a special event. It was packed to the gills and even had tiki vendors out back in the parking lot. Unfortunately, they didn’t allow anyone with drinks out back and it was pretty much impossible to to enjoy the drinks comfortably inside the bar.

Tonga Hut was serving three versions of Mai Tais from original to ginger and strawberry. I opted for an original. It packed a punch probably because there wasn’t much ice in my glass. That was fine with me but it became an one and done. I definitely have to go back to sit at the bar.

Out back the Easter Island Moai head live on… 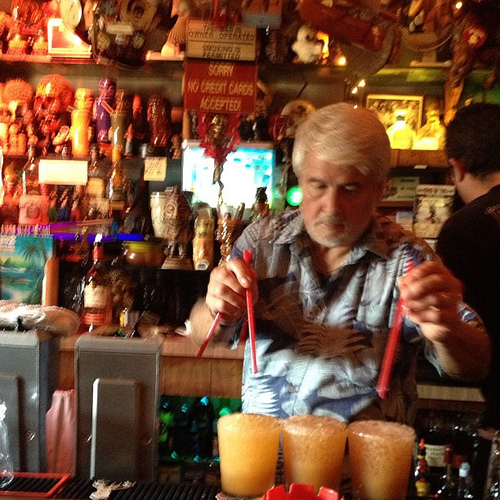 Tiki-Ti is family owned and operated which due to some odd loop-hole allows customers to smoke inside the bar. Of course I go for the cocktails.

As usual, I started with a Mai Tai which I really enjoyed because it wasn’t too sweet. There was plenty of crushed ice and I felt it was a proper Mai Tai.

Tiki-Ti is known for a number of things including customers chanting “toro” when a Blood and Sand is ordered and almost everyone orders a Ray’s Mistake. Named after Ray Buhen who opened the bar, this original cocktail is a secret recipe that causes tiki nerds to debate whether it’s gin or rum based. Tiki-Ti says it’s “super secret flavor, botanic liqueurs, passionfruit and a float of dark Corub rum). The story goes Ray was making a different drink but accidentally put in the wrong syrups. The guest told him they’ll keep it and the new drink was born.

I like this cash-only bar quite a bit but it does get crowded so the best is to go early when they open at 4 p.m. Even on a Saturday we were able to find a table at that time.

1886 at the Raymond has gone tiki for the summer. Of the four drink categories, two are about tiki. They have “Our Tiki” and “Their Tiki,” giving a take on classic tiki drinks and original tiki-inspired cocktails.

When I checked it out last week, bartender Brady Weise was behind the stick. I asked him what I should start with and he recommended the Deconstructed Pina Colada from the Our Tiki section. The molecular interpretation of a pina colada breaks down the classic drink to a spiked lime sorbet, white rum pineapple foam, Barbados rum coconut foam, oatmeal crumbles and misted bitters. It’s served in a frosted sundae glass with a spoon.

I really enjoyed it despite just coming from a dessert tasting only hours before. I probably would have moved on to their interpretation of a Mai Tai; the Shooting Star (saffron-infused gin, cranberry-infused St. Germain) but I was already asking what I should get next when Brady asked if I wanted a drink on fire. Of course I did.

What’s more tiki than something on fire? This Strawberry Colada on Fire was actually inspired by one of Bahooka’s drinks.  Nicaraguan rum is combined with housemade strawberry syrup and pineapple reductions, coconut cream and lime over crushed ice. A hulled strawberry is filled with Lemonhart 151 and lit on fire. It was fantastic.

Check out Spare Room‘s tiki nights on August 14 with NYC’s Julie Reiner and Willy Shine and on September 4 with John Lermayer and a special guest.

There are a few other tiki-themed bars in town and I might have to make my way over for a Mai Tai.