Shake it Up - soon it'll be full of drinks

The 30 competitors were selected from hundreds of submissions. I had a hard time deciding who to root for- Cooper from Thirsty Crow in LA? Adam from Rum Club in Portland whom I original met at Park Kitchen, bartenders from some of my favorite bars like Jasper’s on Tap in SF or Vesper Bar in Las Vegas or Josh from the Bon Vivants?

Who to root for?

One of the cool prizes is this the light up bar the competitors competed with. I spoke with Mathias Simonis who won last year and he said it’s very easy to assemble and break down.

Our genial host was Francesco LaFranconi who I was amazed knew hundreds of dates and facts about every product he was holding up.

Francesco really did a great job with the commentary, even remarking about the coffee Kate Gerwin from New Mexico had time to make and then carbonate. 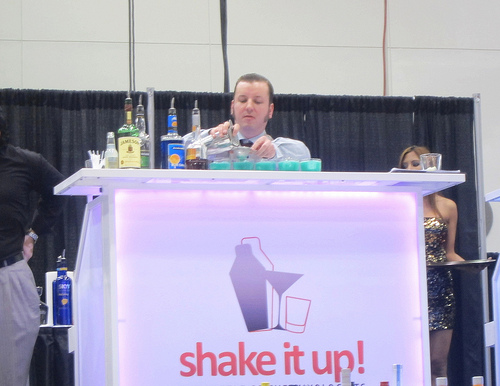 Adam Robinson from Rum Club in Portland, OR

The competition was divided into six rounds of five. Then judges voted for 5 finalists.

One of the finalists, Mike Henderson from Root Down in Denver made it with his cocktail called Beet Down #2– gin, Aperol, Domain de Canton, mint, yuzu, marinated beet cubes garnish. 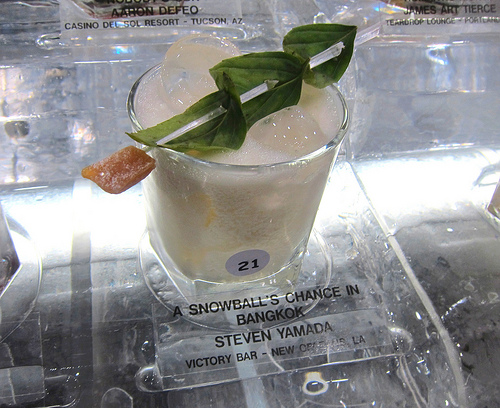 A Snowball's Chance in Bangkok by Steven Yamada

Another finalist, Steven Yamada from New Orleans made it with his cocktail; A Snowball’s Chance in Bangkok.

Josh Harris of the Bon Vivants 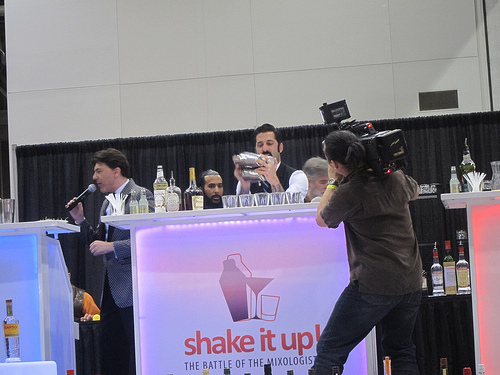 Francesco noticed Josh had three shakers of his cocktail Coppa de Corsica lined up and asked if he needed help. Josh then showed us he could triple shake! The crowd went wild for this move. He along with fellow SF bartender Victoria D’Amato-Moran made it to the finals.

The finalists were given a secret ingredient and allowed some time to come up with a cocktail. They could use any of the products displayed.

Before they announced the winner, they released balloons on the audience filled with cash. Pandemonium ensued.

And then the big moment. Josh Harris from the Bon Vivants won first place! He won with his cocktail, I Left My Heart in San Fran-Pisco, a cocktail of Barsol Italia, St. Germain, the secret ingredient- Mionetto Il Moscato, lime, egg white, Monin agave syrup and carbonated grapes garnish. It’s the cocktail marked #2 in the above photo. For the recipe, check out his interview here with Nightclub.com.