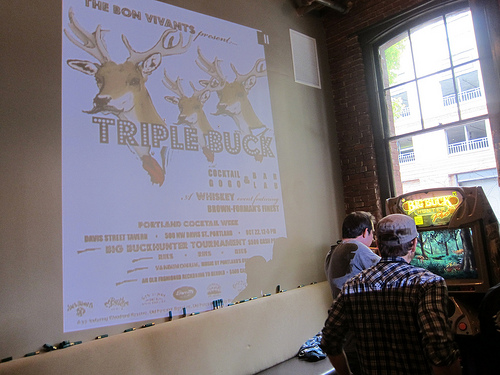 Portland Cocktail Week brought a lot of great events including informative and educational seminars. And then there were the parties. I knew I wanted to check out the Triple Buck event at Davis Street Tavern put on by the Bon Vivants and then maybe catch a few seminars over at Leftbank Annex. But when push came to shove, I stayed the entire extraordinary 5 hours.

Trevor Easter of SF helping out at Triple Buck

The Bon Vivants showed off the Brown-Forman portfolio of 8 different whiskies including Woodford Reserve, Jack Daniel’s and Old Forrester. You could order any of them neat or on the rocks. They also featured one cocktail, Wild Buck (bourbon, smoked fig marmalade, lime, grated hazelnut, ginger beer, fig & thyme garnish) from Bar Lab.

For a mere $5 donation, one got all the booze they wanted plus fantastic food. I heartily enjoyed the ribs and wondered how locavore-happy Portland managed to find watermelon in October.

Metrovino lead bartender Jacob Grier turned up with his balloons. Who knew this talented bartender-writer also made whimsical balloon sculptures? Here he is making me a flower. Aw.

Loved that they were also giving away hats for the event. Nearly everyone was sporting one by the end.

One of the biggest surprises that day was welcoming LA bartender Julian Cox to the event. He and Christina decided at the last minute to come to Portland Cocktail Week.

There were two competitions that day. One was playing the Triple Buck machines brought in for the tournament. The winner got a $500 cash prize. That’s Rocky Yeh from Seattle with his birthday balloon hat. 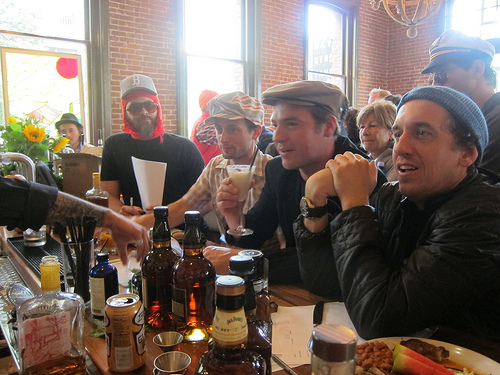 The other competition, or the Reckoning, featured bartenders making two cocktails; an Old Fashioned and a blended drink. Judged by Willy Shine, Eric Alperin, Borys Saciuk and Tobin Ellis, bartenders also had to channel a spirit animal and do a little dance after their mixing. 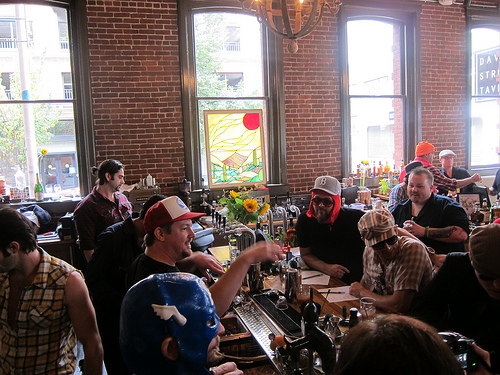 Chris Bostick of the Varnish competing in the Reckoning

Chris Bostick from the Varnish in LA was the second to go and I wondered if judge Eric Alperin of the Varnish would play favorites. But no favoritism was involved at all. 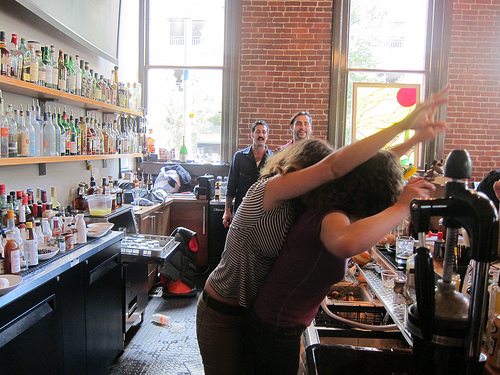 I didn’t take any video of him nor did I catch the first bartender who competed but here are the rest:

Steve Schneider from Employees Only, NY

Allison aka “Fox_Zilla” from San Francisco

Dominic Venegas from New York (but made famous in SF) 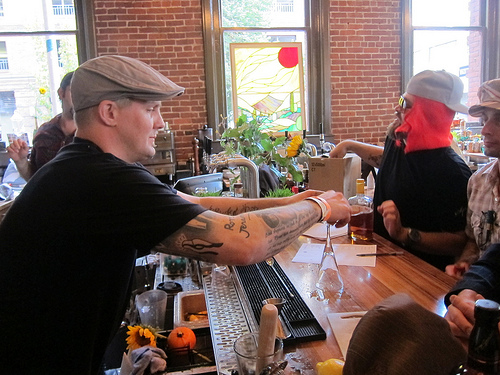 The winner, Mathias Simonis from Wisconsin

I really wondered how Steve from Employees Only could bartend in a mask. Rocky probably embodied his spirit animal the most from muddling with a rib bone to his dance and then Jim’s audacity to tie up his shirt. Just watch the videos and then tell me how many times you’ve kicked yourself for not attending yourself.

I seriously though Russell Davis would take home the top prize just for best presentation of his cocktail. Loved that he stayed calm while a judge poured bitters on his hand as he was carving a small pumpkin as his drink’s vessel. His dancing on the bar was nearly as good as Mathias Simonis’ Eye of the Tiger song and dance. His spirit animal was the tiger, of course. If anyone has video of that dance, Mathias would love to see it.

one of the blended cocktails

This was one of the most rowdy cocktail competitions I’ve ever attended. It was an industry event for the industry yet it didn’t feel closed-off. A gentleman wandered in off the street and said it was the best time he’s had in a long while. The band kept the party mood going and I was loathe to leave but I had to get back to the hotel to get ready for the next party. And then the next one. And so on.

14 thoughts on “Triple Buck with the Bon Vivants”