A week ago, I judged the LA Regional competition for Don Q along with Julian Cox (Rivera, Picca, Sotto, Short Order, Playa), Rich Andreoli (Areal), Rachel Burkons (The Tasting Panel) and Jason Schiffer (320 Main) served as the technical judge. The event was held at the Spare Room in Hollywood. There were pretty punches made with Don Q and plenty of Carribean food to add to the festive mood.

Ten bartenders competed. Their cocktails were scored on appearance, aroma, creativity and taste. Bartenders were asked to keep to Don Q’s theme, “Mix Up the Island’s Spirit.” This competition was run according to USBG rules and each chapter conducted their own competition. Winners from each regional wins a trip to New York to compete in the finals during the Manhattan Cocktail Classic. The winner of the MCC competition wins $1000 and a trip to Puerto Rico.

I was sequestered in the back with the judges. We did not know who made the drinks though I did find out most of them afterward. The Spanish Conquest by Brent Falco was the first drink. I first met Brent from Cole’s when she won the cognac competition at Cana a few months ago.

The next cocktail was from Matt Robold entitled Look Normal. Matt, better known as Rumdood, came up with a cocktail with Don Q Cristal (white rum), lime juice, orgeat, absinthe and orange peel and maraschino garnish. This wasn’t the first time I was a judge at one of his competitions. Matt also works at 320 Main.

Next came Island Time Swizzle by Chris Bostick of the Varnish. At the time I didn’t realize it was Chris’ drink but I should have known when he mentioned before the competition started he had brought his own ice. Besides, the drink also had Meletti and I know that is his favorite amaro. The swizzle is made with Don Q gran anejo, Don Q anejo, Rothman and Winter Orchard peach, falernum, Meletti, lime and grated cinnamon as the garnish. Chris’ drink came in second place. 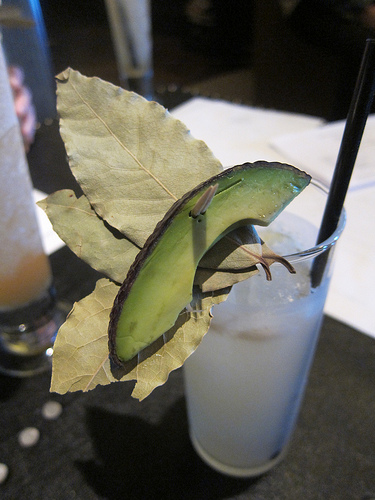 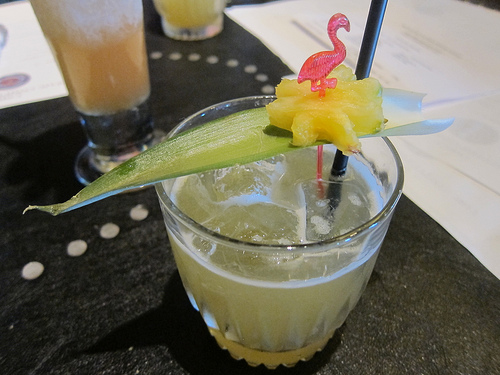 Hot in the Hacienda 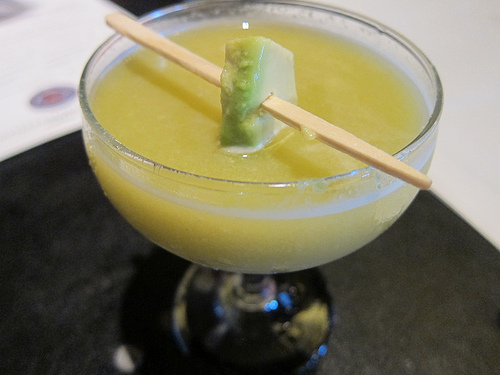 I’m not sure who created the next drink, Hemingway’s Delight. It’s a take on a Hemingway daiquiri with avocado. The Don Q Cristal is muddled with avocado,  plus there’s lime, grapefruit, Aperol and Maraschino. I’m almost positive this drink did not have the Aperol as the later samples appeared to be a different color than what we tried. Also, the flamed avocado cubes did not work out for this bartender. While mine was small and not flamed, another judge got a huge hunk that was partially seared. 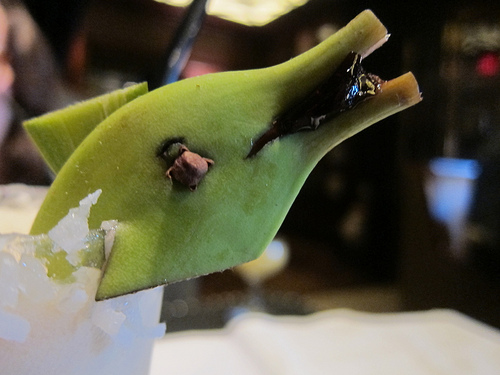 close up on the dolphin garnish

The Coco Almond Coconut came in third place and is by Juan Alvarez, the former So Cal USBG President. The week before, he won the LA Campari competition so this man is on fire. His adorable dolphin garnish won high praise from us. The drink is made with Don Q Anejo rum, Don Q Coco, dark creme de coco, creme de coco (Coco Lopez), Frangelico and a splash of cream. This is not a diet-friendly cocktail but real boozers wouldn’t order skinny cocktails anyway. It was kind of amazing as it’s a blender drink. It’s fun, it defies the seriousness of the whole “mixology” thing that’s happening around the country and yes, that “dolphin looking thing” garnish. I might have to take a trek down to Juan’s restaurant, J. King Neptune for more tropical drinks.

From Eveleigh’s Kiowa Bryan came the My Cherry Amour, made with Don Q Cristal, Maurin Quina, orgeat, Bitter Truth pimento dram, lime. There was great color to this cocktail and quite drinkable. It definitely had an island feel to it. This was probably the only cocktail that I had a hard time scoring. For sure it was one of my favorites of the day. 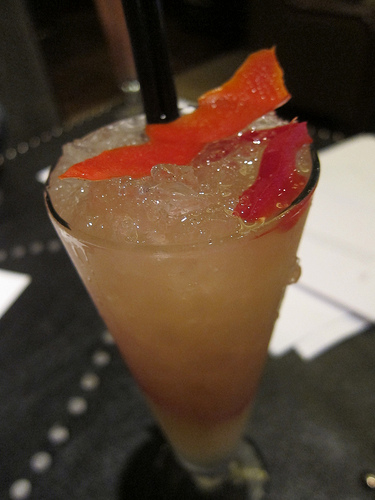 And lastly was the Oro de Cervantes from Seventy7 bartender Randy Tarlow. I happen to really like red bell pepper in my drinks but when I tried to eat a piece, I thought it hadn’t been washed. It was so bitter and it ruined the cocktail. Too bad as I did like this drink made with Don Q gold rum, Green Chartreuse, lime, sugar cane syrup,  red bell pepper, ginger beer, Bitter Truth Creole bitters.

I’m looking forward to the finals in New York in a couple of weeks. Let’s see if Edwin’s drink can bring home a big win for LA! Go La Boriquena!