With the World Cup in Brazil this year, there’s been a greater interest in Brazilian culture including their native spirit cachaca. In the past, cachaca was thought of “Brazilian rum” and up until recently had to be labeled as rum in the US market. It is now recognized as its own thing. Rum is made from distilling molasses while cachaca is made from sugar cane juice. On a side note, rhum (that’s rum with a H) agricole is also made from sugar cane juice.

I explored the cachaca category further by tasting and learning about Avua Cachaca. Currently there are two expressions available; the Prata (silver) and Amburana (aged). In Los Angeles, it’s available at 213 Nightlife bars like Casey’s and Cana Rum Bar. 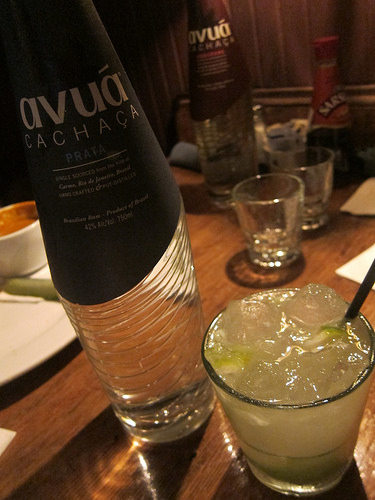 Avua Cacacha was introduced to the US market last year by Americans Nathan Whitehouse and Peter Nevenglosky. Nate was a lawyer in New York when he fell in love with cachaca. He went to Brazil and developed Avua with a family that had been distilling cachaca for 3 generations. With more than 80 years experience, the family also boasts of one of the few female distillers in Brazil.

The Prata is a great choice for the Brazilian drink Caipirinha (cacacha, lime, sugar). Or if you want something to sip on, the Amburana was really cool. It’s aged in Brazilian wood and has that special funkiness I look for in a sugar cane distillate.

Learn some Portuguese slang to throw around while watching the World Cup.